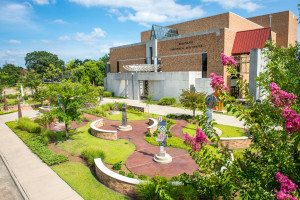 The Bologna Performing Arts Center at Delta State University was built in 1994 through state funding from the Mississippi legislature. The state-of-the-art facility was built to offer a rich tapestry of cultural and educational programs to serve the entire Mississippi Delta. The Bologna Performing Arts Center, a 41,500 square feet multi-disciplinary facility, first opened its doors on September 1, 1995. The Bologna Center features a full working stage, orchestra lift, and houses two performance venues: the 1,183 seat Delta & Pine Land Theatre and a separate 145 seat Recital Hall.

Dr. Nino Antony Bologna
11/29/1918 – 10/05/2008
Dr. Nino Antony Bologna, a Greenville, Mississippi dermatologist and pediatrician, helped fund Delta State University’s Bologna Performing Arts Center.  He is remembered for his generosity, work ethic and love for the Delta.  Lifelong friend David “Boo” Ferriss stated, “I shall never forget him talking to me about his desire to do something for the arts in the Delta. After coming to Delta State’s campus and touring the new performing arts building, he was most impressed and could visualize what this center could mean to the arts of the Delta. It was with great pleasure that he and his wife, Betty, made a major gift to the center in memory of their children, Nina and Sam.  The people of the Mississippi Delta and Delta State students will continue to enjoy and benefit from their generosity for years to come.”

There are many other opportunities to support the Bologna Performing Arts Center, including: